WITH ANY QUERIES PLEASE EMAIL US - WE CHECK EMAILS EVERY DAY: souvenirgallerylondon@gmail.com

OUR ONLINE SHOP IS OPEN FOR US TO POST OUT TO YOU: SHOP ONLINE

Souvenir – A Treasure Trove in Highgate

By now, readers of my blog know that I tend to stumble across places. Often it’s while looking for bijoux flats, other times it’s because I’m out and about looking for inspiration. This was the latter. I drove past the shop window and just had to stop. In I went!

Souvenir opened its doors for the first time just over a year ago. It’s a space showcasing the work of exciting British-based artists and designers. You’ll find handmade products like prints and illustrations, jewellery, textiles, homeware, stationery and gifts. There’s also an ever-changing selection of vintage treasures.

Meet Cassie Ostwald, a graphic designer and former set designer. I wanted to know what made Cassie open a shop so asked her a few questions! 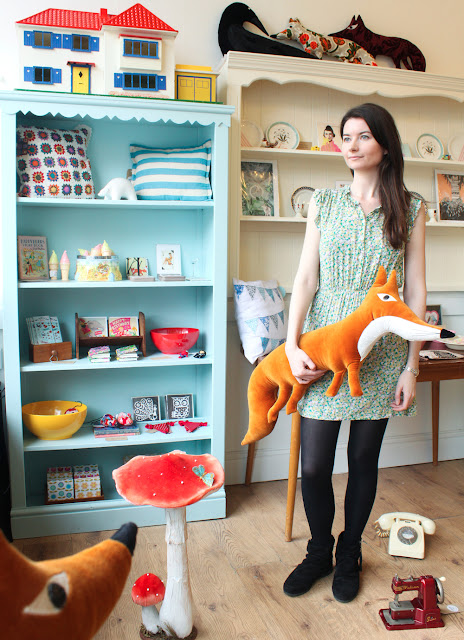 What is your background? Do you come from a creative family?

I graduated as a graphic designer and then worked as a set stylist before opening Souvenir. My family are all creative – my parents met at Central St Martins and both had creative careers. My father was a graphic designer, then moved into directing TV commercials. My mother was a fashion designer before opening several of her own successful shops.

How did you arrive at opening a bricks and mortar gifts boutique? Did you ever consider only online?

I’d been thinking for a while about opening a space showcasing the work of exciting new artists and designers. Then the shop in Highgate came free and I’d grown up in the area, so knew it well. I wanted an actual space, rather than just selling online, so that I could create an environment for people to step into and experience. I like being able to use the windows to create eye-catching displays and I enjoy the process of meeting customers and seeing their reactions to different pieces. You can’t get that from an online shop.

How do you choose the products you want to stock?

I look for pieces that are unusual, well made and affordable. The idea of the shop is that everything looks like an illustration, whether it’s a cushion, an eggcup or a necklace. I like things to be functional as well as beautiful. If it makes me smile or it’s something I haven’t seen before, then I’m drawn to it. There’s an animal theme in the space, particularly foxes - this wasn’t planned, but has turned out to be what most customers respond to.

You specialize in British-based artists and designers. This is a refreshing approach…

I decided to focus on British-based artists and designers as we have so many talented people here. I also wanted to be able to meet the artists whose work I showcase, and to support our economy.

What are the ups and downs of your first year of trading?

The first year of trading has gone by so quickly. The ups have been meeting all of the different people who step into Souvenir and hearing their amazing feedback about the space. When people stop in their tracks as they walk past the windows and start smiling at the pieces they’re seeing. The amount of people who say they were driving past and had to stop and come in. How enthusiastic everyone has been about the shop, especially local people who are so pleased to have it in the area. Being chosen by ‘Time Out’ as one of London’s best new shops was wonderful. The downs would have to be the current economic climate, but we’re still doing well in spite of it, which makes me feel positive.

Do you have a vision / dream for the future of Souvenir?

I would like to continue to discover new and exciting artists and designers. It would be great to eventually expand to other locations.

I’m sure you’ll agree with me that if the UK had more shops like Souvenir, our high streets wouldn’t be in such disarray and this would give the growing online shopping industry a run for their money. It was rather a pleasure to be there and purchase my goodies. I certainly left with a smile on my face!